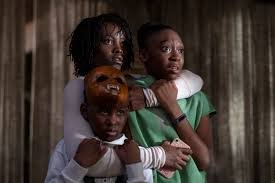 Well, at midnight, a month after its UK release, I’ve just walked out of a Friday night, 10pm screening.

It has the best bits of all the great horror stories, and more. Whilst also having horror-humour reminiscent of The Shining. It was scary and funny, clichéd and original. And combined, that was an even more brilliant package! For me, it totally earned its two hours of screen time!

Every time I thought I’d got the measure of it, and started to relax, thinking it was getting a little bit predictable – it threw me a curveball. Right to the very end.

Written, directed and produced by one man – the ‘comedy guy’, Jordan Peele – you are left in no doubt that this person is an astute student and lover of films. And he intertwines the lessons he’s learnt so well, that when you do notice you also see the playfulness of it.

You know that some people were thinking: Yeh, he did the wonderful Get Out. But could he do that again. Erm, yep!

And the ultimate beauty is: Us, isn’t a ‘black film’. It’s a brilliant horror-comedy, which happens to have a normal black family at its centre.

Dad is goofy, teenage daughter is eye-rolling, little brother is annoying and mum is overly-protective. Until you realise, she really isn’t!

It’s so normal that it’s wonderful. But it’s also not normal at all. It straddles the line between horror and comedy, black and white, beautifully.

But, the fact that these black people are so normal – and that the normality is noticed and commented on – is exactly why it’s such a big deal. So, never, ever underestimate that.

Lupita Nyong’o is brilliant. But, I have to say, so are the rest of the cast. Especially, Shahadi Wright Joseph, who shines as the daughter, Zora – and more. (No spoilers here!)

Hats off to JP. He’s done it again!