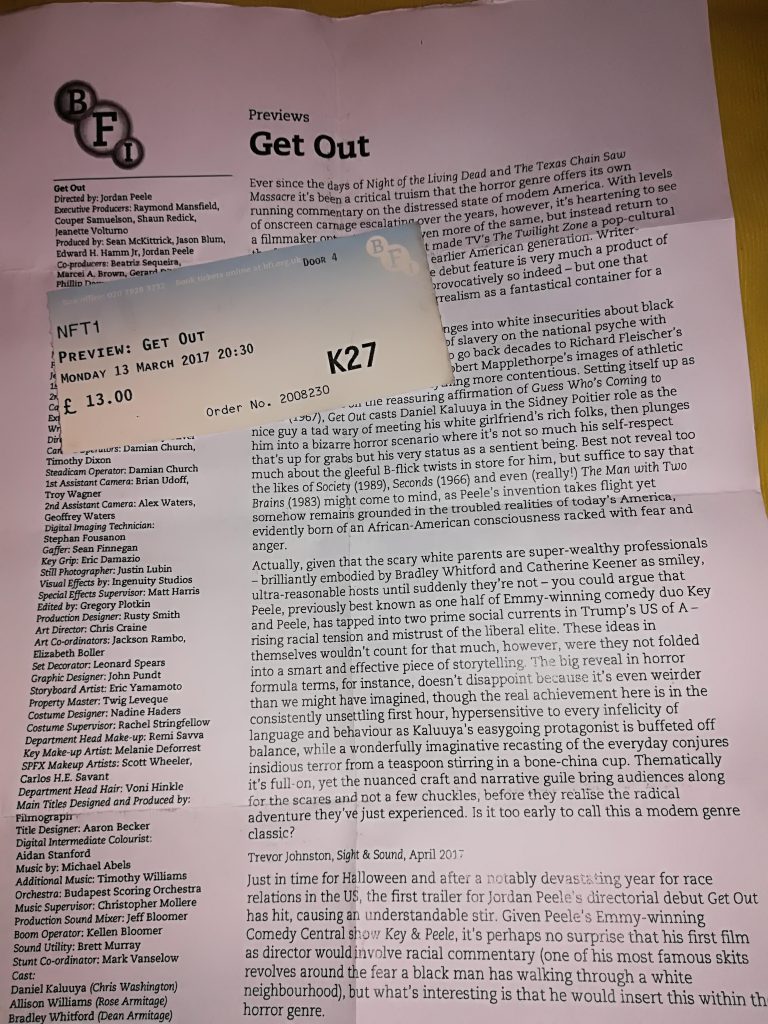 I go to film screenings by myself a lot – especially if there’s a Q&A. As much as I love my mates, there’s nothing more frustrating than waiting for someone to come back to you, or to make up their mind about an event, only for it to sell out before you’ve been able to buy a ticket. Well, there is ONE thing more annoying…. It’s the friend who can’t help but talk throughout the film and/or the Q&A… Yes, I admit it. I’m that ‘square’, that really irritating person who just wants to “SSShuusssshhSSSHH….” everyone in the cinema, theatre, pub back-room… even some music gigs… If I can hear you above the artist’s voice or instrument, something’s wrong.  And in the same way that some people can’t bear the sound of fingernails being scraped down a blackboard – something that doesn’t bother me in the slightest – the underlying rumbling of people’s whispers in an auditorium grates on me, massively…  [OK, maybe the reason my friends take so long to come back to me is because they just don’t want to go places with me… I get it.]

Because I am so unsociable when I’m in THAT moment, I have absolutely no problem going to screenings on my own. I actually kinda like it. I’m happy to laugh heartily to myself at funny things. And it’s no more embarrassing to sob at sad things by myself than it is in front of my mates…  So, I go along, get my fix, leave happy and, depending on the time of day or night, I can still meet friends afterwards, if I want to.

But, very occasionally, I see something so special that it spins me out and leaves me so excited – or outraged – that I can’t contain myself. And at those times, I wish I was with a mate.

Last night was one of those nights.

I was desperate to get a ticket to this preview – the trailer had me hooked and I couldn’t wait to see the film. I knew Jordan Peele was a good comedy writer-performer, from his Key and Peele work, but this looked next level. I didn’t want to raise my hopes up too much…  Perhaps I’d already seen all of the best bits, in the trailer.. I needn’t have worried. It really was next level. A horror film, but by no means your run-of-the-mill kind. 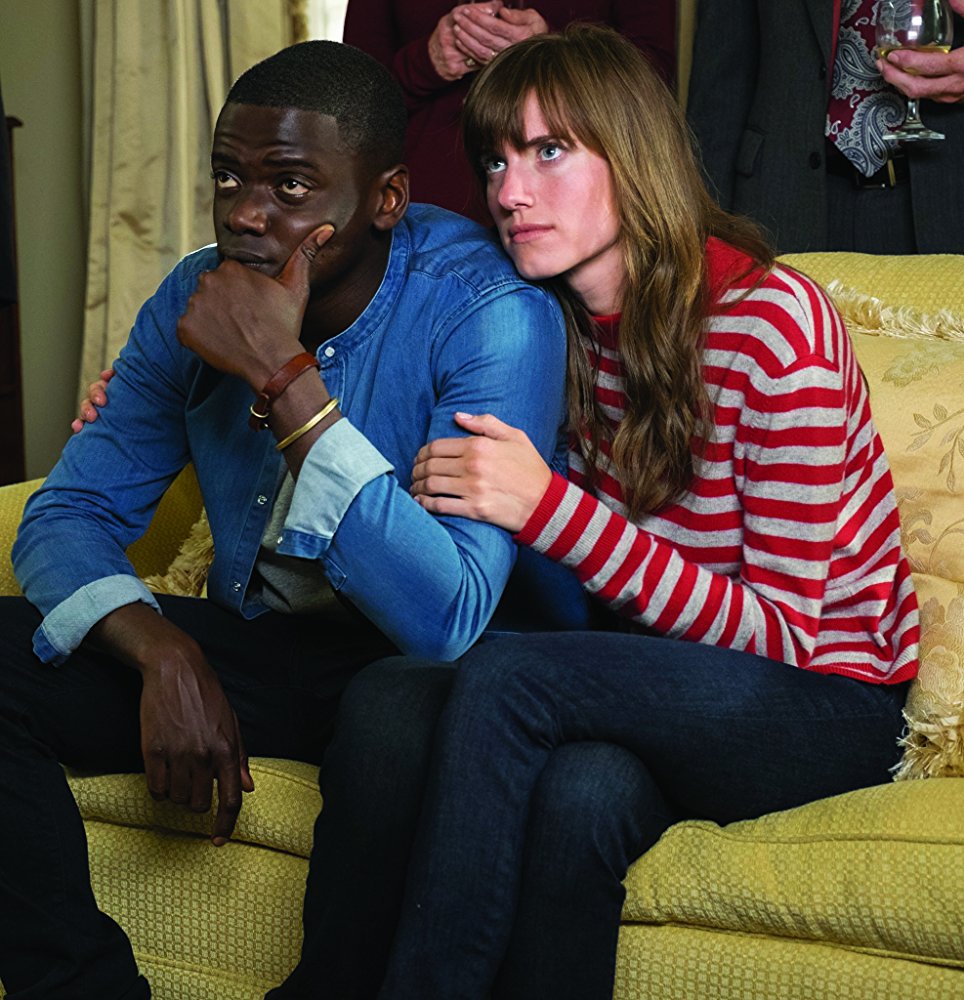 A horror movie where the black character isn’t killed off pretty much straight away? Yes, we’d heard of such things but we never dared to dream that we would really see the day…. OK, I’m playing with you slightly there, but you get my point… Not only is this a mainstream horror film with a young black man in the lead, it’s an American horror movie written and directed by a brilliant/iconic/cult, black comic-writer-performer, starring a young, black British actor, and with the in-your-face-dealing of a subject of which we usually dare not speak…

Talented, black photographer, Chris – brilliantly played by Daniel Kaluuya – and his white girlfriend Rose Armitage – Allison Williams, who’s also great in this – are a modern couple living in the city and about to visit her parents together for the first time. When Chris asks if they know he’s black, Rose reassures him that it doesn’t matter that he’s the first black guy she’s dated, it won’t be a problem. She teasingly adds: “My dad would’ve voted for Obama a third time, if he could!”

Chris’ best mate, Rod – played with spot-on hilarity by LilRel Howery – tells him: “Let me give you some advice. Don’t go to a white girl’s house.” So far, so banter…

On the drive there, a bizarre road accident with a deer results in Rose defending a resigned-to-it Chris against a cop with racist undertones, later poutingly telling her boyfriend: “No-one messes with my man.” If he wasn’t already in love with her, then that would’ve been the moment he fell. But the encounter puts their jovial trip, and us, just that little bit on edge.

At the Armitage family’s huge country pile, Rose’s parents – hypnotherapist, Missy and neurosurgeon, Dean, played mesmerisingly by Catherine Keener and Bradley Whitford – welcome him with open arms, literally, declaring: “We’re huggers round here” and telling him to  make himself at home. They make light of the odd behaviour exhibited by their black maid, Georgina, and their black groundskeeper, Walter, both of whom show absolutely no flicker of recognising the kinsmanship that Chris is trying to subtly convey to them in this very white world.  Dean talks of how embarrassed he is that his only two members of staff are black – he knows how it must look. But he explains that they originally came to live there to look after his parents, and by the time the parents died, they were like family (“family”… as is often, earily repeated…) and he couldn’t bear to send them away. To add to the family fun, Rose’s brother, Jeremy (Caleb Landrey Jones), shows up – clearly a loose cannon, but full of cute, embarrassing stories about his sister and kept strangely in line by their mum. 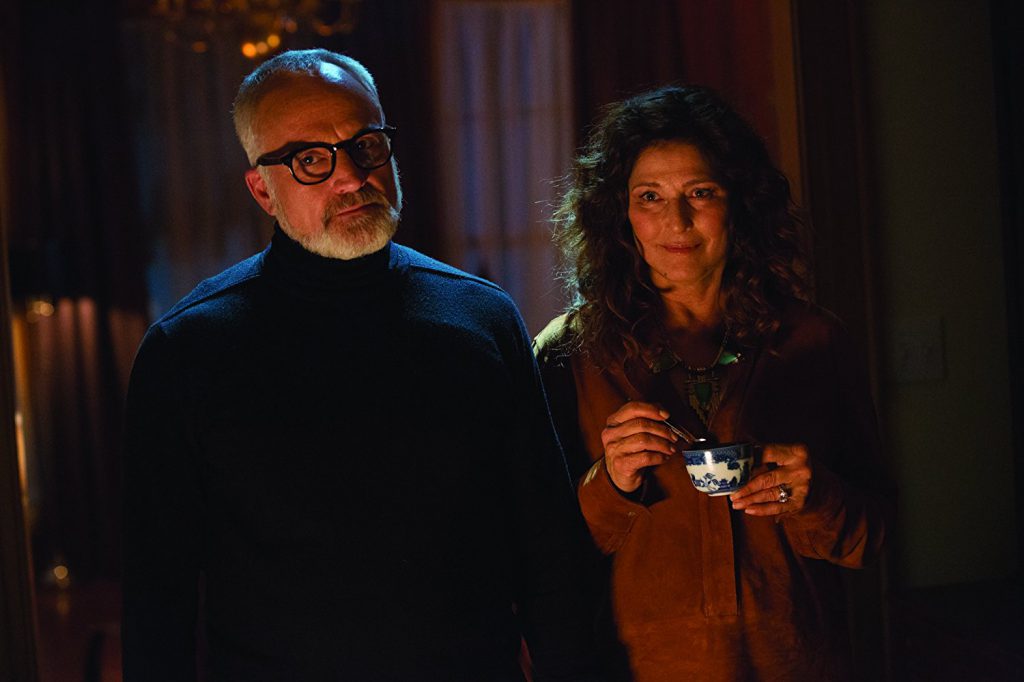 And so kicks off the weekend from hell. Full of some great twists, and one freaky garden party, with a star turn by Lakeith Stanfield, Get Out will keep you on the edge of your seat with both fear and laughter. I was gripped throughout.

The hand-out that the BFI gave us, describes this as a ‘nightmare spin on… Guess Who’s Coming To Dinner’. Obviously a great comparison but also a wonderful understatement.

Like Sydney Poitier’s character, Daniel Kaluuya’s Chris is nervous about meeting his girlfriend’s posh white parents. However, Get Out pushes the theme to the limits. It taps into a spoken/unspoken/conscious/unconscious, kinda primal fear…  (yes, all of the above). A fear that has had good reason to grow over recent decades and perhaps, unknowingly, become ingrained into black people… In this film, those nightmare scenarios that black people secretly have in the back of their minds – whether consciously or unconsciously, but stemming from a history of repression and horrific abuse such as slavery and lynching – are brought to the fore. What’s going to happen to us when we submit ourselves, wander off without the rest of our clan, and make ourselves vulnerable?… In this psychological horror, Rose’s hypnotherapist mum, Missy, takes Chris to ‘the sunken place’ – a term used to refer to black people who are in denial about oppression (I’d never heard the expression before, but guessed that it must have a meaning, so looked it up)… And the only other black people we see are clearly not in their right mind.. A symbolic touch handled very cleverly by the comedian in Jordan Peele.  The other scab that this film picks at, is the theory of white people’s obsession with possessing and controlling black people, black minds and black bodies. Seeing it played out here, by highly-respectable, rich white people, whilst referencing Obama, one can’t help but think about America’s racial problems, especially Trump and his cronies. Smiling assassins. On the face of it, spouting their Christian, moral high-ground, while doing what the hell they like and shafting the poor and the vulnerable while they do it… Sitting back and writing this review, I realise that it might all sound pretty deep and a bit heavy. And, it kinda is, really. I’m a black women, I’ve got LOADS of white friends – and godchildren – and I’ve never experienced anything but warmth from their families or from the parents of my white boyfriends. But inherently I still totally get the joking-not-joking context of Rod’s comment: “Let me give you some advice. Don’t go to a white girl’s house.” But what makes this film so brilliant, accessible and enjoyable is that all of those layers of meaning, whilst underpinning the story, are there to be unpicked later. If you want to. Because at its core it’s just a bloody good horror film and the themes are wrapped up in funny, clever, fantastically-scary storytelling. And acting. Such great acting from the entire outstanding cast. 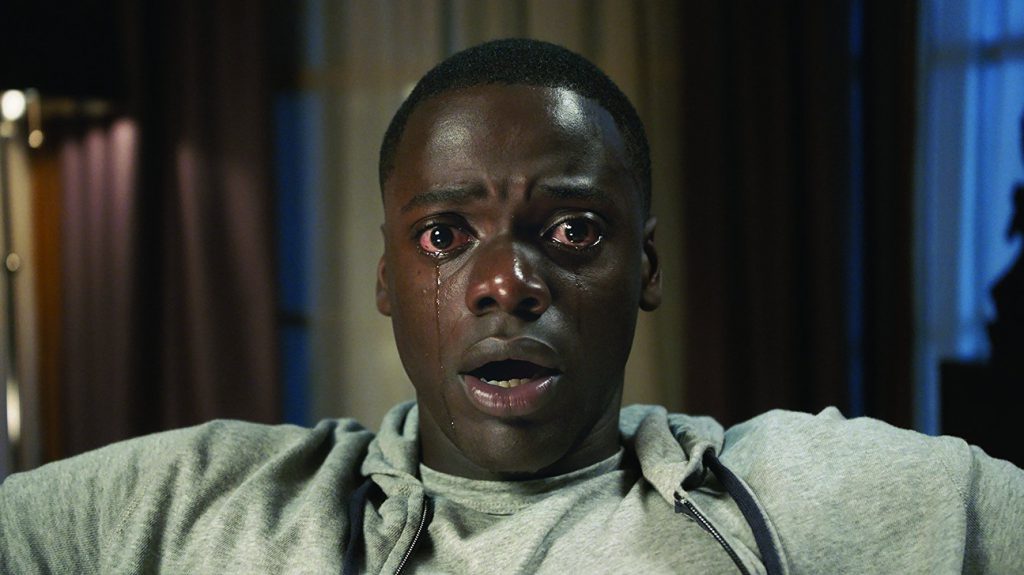 I’ve already nodded to the totally brilliant Daniel Kaluuya, portraying the black person in all of us, as Chris; Allison Williams is perfect as Rose; funny man, LilRel Howery, as Rod; and Catherine Keener as Missy. The list of great cast long. But a special mention also needs to made of Betty Gabriel, as Georgina the maid – not just freaky but also slightly heartbreaking, as well as Marcus Henderson as the groundskeeper, Walter.  And the film is worth watching for the sub-plot alone, where Rod tries to save Chris by going to the police, in a short but brilliant scene starring Erika Alexander, Jeronimo Spinx and Ian Casselberry as unconvinced detectives. It totally cracked me up.

Most of the time whilst watching this film, the tension was palpable in the auditorium. When it finished there was an immediate, spontaneous standing ovation and rapturous applause. And it wasn’t a Q&A. It was just a screening. So we were just clapping the screen. It was brilliant. And for Jordan Peele to successfully cover such delicate themes with humour, shows what a smart man and accomplished writer he is.

When it was over, I felt euphoric, like I’d just come off a rollercoaster. I gave my neighbours a huge grin. But, if my mates had been there, they would definitely have got a hug of joy… Reminding me that sometimes it IS good to go the cinema with your friends…

Erika Alexander, Jeronimo Spinx and Ian Casselberry, as detectives in Get Out

Update: 22nd March 2018: A year later, I’ve just got this on DVD and watched it again. I was absolutely buzzing with excitement as I lined up my glass of wine and my snacks, ready to press play. And, once again, it didn’t disappoint.  And since watching it the first time, I’ve since found out that Jordan Peele’s wife is white. To me, that makes this brilliant film even more special. The best writing comes from a place of honesty and connection. Jordan wasn’t afraid to tap into difficult issues and not only did he do it with smarts and humour, he did it so well that he even won an Oscar for it! #BlackBoyMagic