“The only good system is a sound system”

Great night watching a preview of Beats, a coming-of-age bromance that sees the nervous, down-trodden, Jonno, and his best mate, the seemingly-simple, Spanner, plan one night of madness together before they’re forced to come to terms with the cards that life has dealt them.

Jonno is being moved away from his Glasgow estate and life as he knows it, to a Barrett new-build house, with his mum, little brother and her new boyfriend – who happens to be a copper. Spanner, is at the mercy of his drug-dealing, bully of a big brother, whose antics have led to the whole family being branded as ‘scum’.

Set in 1994, the year that the Criminal Justice Act was introduced, banning public gatherings where music with ‘repetitive beats’ was played – this is more than a rave culture movie, it’s a quietly political look at what the director and co-writer, Brian Welsh, described as the beginnings of the erosion of civil liberties, overseen by Tony Blair, amongst others, who in the same year took over leadership of the Labour Party, following John Smith’s sudden and heartbreaking death from a heart attack. News clips, including speeches by Blair, play out on televisions in the background, throughout.  Brian recalls the feeling of hope when Blair first took the role – and how that was soon replaced by the feeling that the Labour party was turning into another version of the Tories. 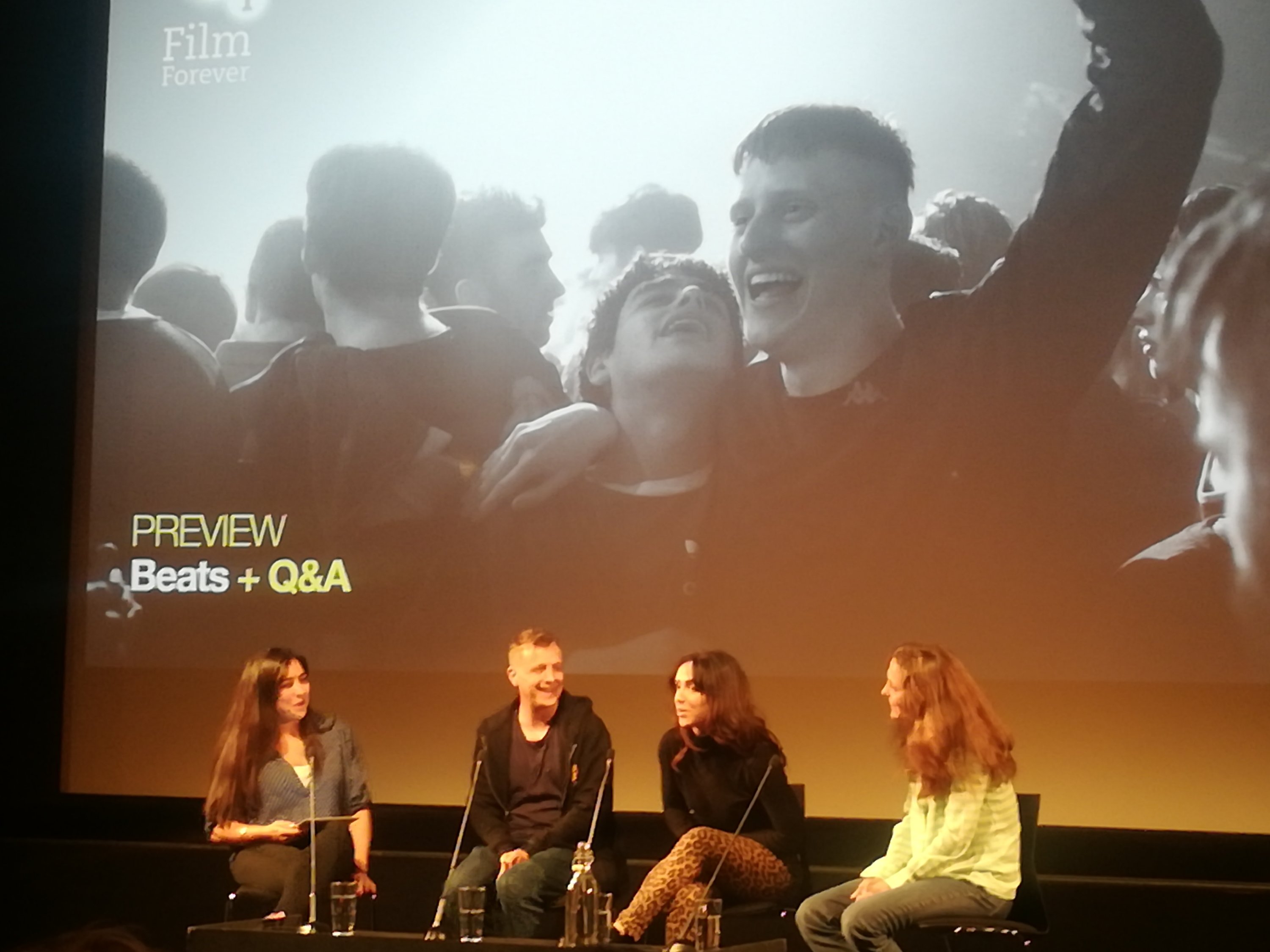 Co-writer and director, Brian Welsh (second from left), Amy Manson, who plays Cat (2nd from the right) and producer, Camilla Bray (far right), at the BFI preview of Beats – Monday, 13th May 2019.

We follow Jonno and Spanner, as they try to make sense of their place in the world – and their soon-to-be torn apart friendship. We watch as they try to stand up for themselves and their independence – in their own little way – and as they’re taken under the wing of Spanner’s cousin, Wendy, and her two friends, Alison and Cat, all looking to reach the Holy Grail of escapism: An illegal rave.

Strikingly-shot, Brian explained that they removed the words ‘black and white’ from the script, in order to get funding, and let it be a surprise when they sent the first cuts through for people to view. He had to argue to keep it that way – but it was definitely an argument worth having.

Other ‘fights’ along the way included finding budget to hold a genuine free rave, for 1,000 people. The producer, Camilla Bray, recalls the phone call when Brian told her that he was seriously upping the ante, from the original idea of shooting in pre-existing club nights, and editing footage together, and instead going all in, to create the real thing. It was an expensive risk – but one worth taking, as it feels totally genuine (and I was at the original raves, back in the 80s, so…).

One thing that hadn’t occurred to me was how much dancing styles have changed in the intervening years. But Amy Mason, who plays Cat, explained that the cast had a day of dance instruction, to get their mind out of today’s slut-drop, twerking kind of moves, and into the ‘big box, little box’ mindset. Brian pointed out that as this was pre-our obsession with mobile phones, everyone was less self-conscious and freer with themselves. It was pure, let-yourself-go dancing, rather than pouting. So, they also sent a clip of what they were looking for, in advance to all of the extras who were going to the rave, so that they knew to loosen up.

The result, combined with a stonking soundtrack of dance classics, takes over the film at one point, with what must be a good five minutes (seriously) given over to a pure, sonically- and visually-indulgent moment, that could easily be cut out of the film and sit as a music video by itself.  Despite it being set to rave tunes, there’s something very tranquil (or perhaps that’s just trippy…) about it – and it’s a lovely calm-before-the-storm moment, that is done very well. I’m surprised (but delighted) Brian wasn’t forced to edit it out, or at least significantly down.

The film is based on a play by Keiran Hurley, who went on to co-write this with Brian. I didn’t see it on stage, unfortunately, but I love the way that they’ve brought Tommo and Spanner’s characters and relationship to life on screen – played with aplomb, humour and heart, by Cristian Ortega and Lorn Macdonald. You feel their heartache and their joy, as well as their love for each other.

As the boys often say themselves: “It’s magic”.

Beats is on general release from Friday, 17th May 2019. Sadly, we’ll have to wait until September before we can get our hands on the official soundtrack. However, there are some mixes available on mixcloud.